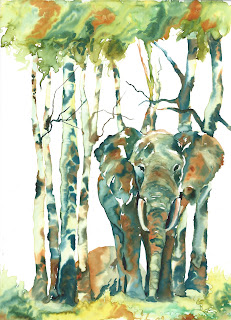 Feed the Birds
Water the Earth
Smile upon a Stranger
Reach out...
Lay Blessings at the feet of Angels
Hang your wash and feel the Air
Step outside and Breathe
Wish upon a Star with a Child
Whisper Stories and tell harmless untruths
Be the stream ....Flow
Love Strong, Love Spontaneously
Dream
Imagine the Possibilities

As we lose some of our treasured souls upon the Earth may we forever honor them through our words, our actions, our art form & our love.
To Jean Price, Meinrad Craighead, Lola Arvidson, Darla Ordway, & the Peets.

To many others whose passing has touched and forever changed us.
Reach out and ask for a blessing to be sent through art anytime. Call my number 406-431-9479 or email sunnybunny60@gmail.com. This a gift with donations accepted. All art is created on antique handkerchiefs.
Annie
Posted by Annie on April 29, 2019 No comments:

...and the rocks feigned indifference as Mother Earth fed our roots on a daily basis.

Ah, it's taken awhile to recover from a harsh season. This season was not Mother Earth's doing, this season was a bouncing reverberation from shifting times on our planet.
The rocks provided footing and the grateful need for our trees, our air, our water, our living creatures to sustain us was immense.
Thank goodness for the arts. They have kept me afloat in order to help others and myself.
We are beginning to see light at the end of the tunnel called life. Tubac called us to her arms for another season. We answered yes.
Trace, my soulmate, is recovering from 2 surgeries and his step is lighter all the time. Meanwhile I'm getting my footing back through art. It was difficult and one step at a time was required. I had lost my footing. Two paintings came out screaming. They are below... but walking upon the earth's surface has always providing deep healing and once again Mother Earth fed me. 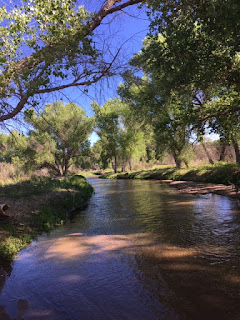 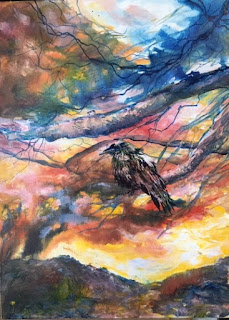 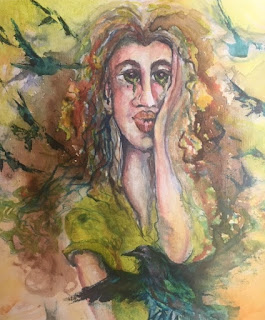 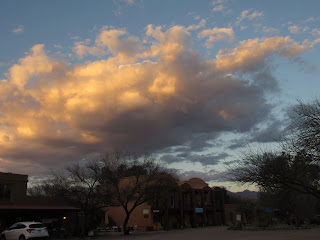 At last, I have returned to the high desert and Tubac! I was listening with one ear open a few days ago as Annie and Clark were sharing idle prater. Annie said, “I think this is our 7th year of coming to Tubac.” As it must be with humans my first thought was, “has it been this long?”

Ah, but I get ahead of myself with this 7th journey. Deep in the bowels of this past winter I began to doubt that on this day in Tubac I would hike the Santa Cruz trail, let hummingbirds twitter about me, or inhale the awful scent of those Longhorn cattle lounging on the edge of the Golf Course. In Bostie speak, I think Clark was a mess for awhile. Either that or he got lazy in the middle of the snow and cold and let Annie do all the work around our Ranch. One night as I sprawled out in front of the fireplace after dinner with the outside temperature plummeting, I overheard Annie telling Clark “this will pass.” Being a Bostie, I was certain she wasn’t talking about kidney stones. Turns out, she wasn’t. But enough chatter about these past Montana Wintertime beasts.

We are prospering here in the sun, soft soil, and magic of Tubac. The people food Annie slips to me is delicious, albeit spicy but I like it. Maybe I have some Chawawa back there in my boneyard? I’ve met some fellow chaps out on our hikes. Most of my new friends are friendly and linger to sniff.  However, out on the River Trail the other day I was forced to give some under-civilized mutt my best guttural growl and a nip on his ass. I detest meeting rude (read crude) brethren. I must have got him good as he yelped. His human muttered something, Annie’s nostrils flared and we bid those cretans adios. Just when you think you know a thing or two about your kind, you get drawn up short. My best advice when your tail is out on the trail is “watch and listen.”

I’m catching up on some napping today. Clark is keeping me company as Annie is taking an art class at the Tubac Center for the Arts. Hey, I know what I’m talking about. I’ve walked by this place a hundred times. I’ve learned that tomorrow Annie is bringing some kind of pig to our apartment for painting. I think this piggy is called a “Javalena.” From what I’ve heard only a small number of artists are getting a piggy to take home and paint. I’m so proud of her.

I’ve been keeping my eye on Clark and I have to tell you he’s been working hard on his tan. That guy takes his sunning seriously, something about “showing those opaque gringos back in Montana” when we get home in April. As for me, I do as the locals and siesta in the shade during the heat of the day. We Bostie’s know a thing or two.

Well kids, I anticipate Clark is preparing me a mid-day snack so I need to show some interest.
I am doing well in this Sonoran Desert. Sometimes I think of you. 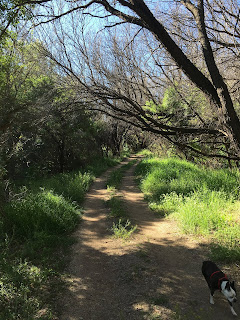